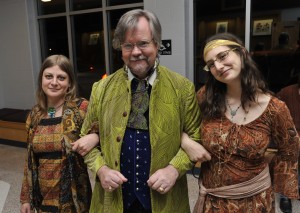 To say that Clint Hicks has had a wide-ranging career would be an understatement. Not only is he a noted computer-book author and novelist, he has appeared on stage in productions as diverse as Shakespeare’s Macbeth and Avery and Marsh’s Garden Variety. “DrClint” holds a Ph.D. in cultural anthropology from the University of New Mexico, making his current role as The Professor in Soundtrack to the 60s by no means a stretch.

A longtime resident of Santa Fe, New Mexico, DrClint has two children, Angie and Gabe. His wife Rosanna (who designed that boss Nehru coat he wears in the show) is a member of IATSE Local 480 and has worked as costumer on numerous film and television productions, including Crazy Heart and the Breaking Bad spin-off Better Call Saul. In his spare time, Clint enjoys gardening, cooking, and taking care of his koi.